What’s behind billions of dollars deposited at foreign banks? 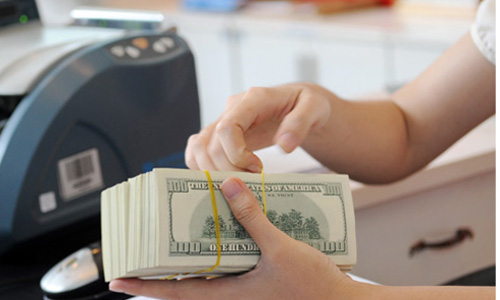 VEPR believes that the adjustment of the exchange rate policy, including the decision to slash the dollar interest rate to zero percent, has placed big challenges on the banking system.

“Even if the dollar interest rate is slashed to zero percent, people would still buy dollars and businesses would still borrow dong, not dollars. Banks cannot lend in dollars despite the low lending interest rates. The whole banking system is facing a liquidity trap,” said Nguyen Duc Thanh, head of VEPR.

The liquidity trap has forced banks to deposit dollars at foreign banks to make a profit, while waiting for the dong to be devalued.

This is also why a huge volume of dollars was transferred by Vietnamese commercial banks abroad in the third quarter of 2015. Thanh said the volume of deposited dollars was $7.3 billion at that time.

Also according to Thanh, the dollar outflow stopped in the fourth quarter of 2015 because the State’s policies became more stable.

The VEPR’s viewpoint that the banking system has fallen into the ‘foreign currency liquidity trap’ has raised controversy.

Can Van Luc, deputy CEO of BIDV, one of the largest commercial banks, commented that the depositing of $7.3 billion at foreign banks within one quarter is "a normal operation".

“This depends on demand for foreign currencies to make payments for imports/exports, which always increases in the last few months of the year."

In addition, the market experienced high exchange rate risks in the third quarter of 2015.

The State Bank of Vietnam’s representative confirmed that it was normal that banks deposit dollars at foreign banks when foreign currency deposits from individuals and economic institutions increase sharply and the domestic credit decreases.

Luc from BIDV denied that banks have fallen into the ‘liquidity trap’. “As far as I know, banks continue lending in foreign currencies very well,” he said.