Why doesn't Vietnam have large businesses? 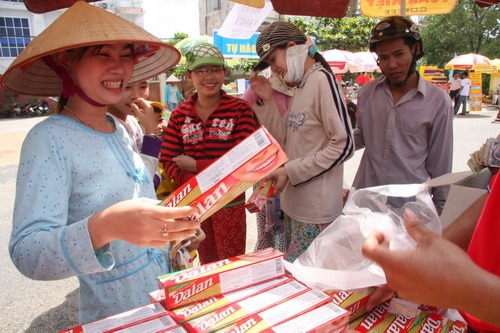 More than 90 percent of Vietnamese businesses are small and Vietnam does not have large corporations which can act as pillars in most business fields.

The rumors about FPT selling its retail chain are true. Sources said that Vietnam's largest information technology group, together with a consultant, is taking necessary steps to sell one of its most important subsidiaries. The partners interested in the company are all foreign entities.

The deal, when wrapped up, will add one more item to the list of the Vietnamese enterprises sold to foreign investors.

In late 2014, Kinh Do Group surprised the public with the announcement to sell 80 percent of its sweets manufacturing division to Mondelez International. The deal brought $370 million to Kinh Do’s owner, a large sum of money for any Vietnamese enterprise. However, the deal has put an end to a purely Vietnamese brand which existed for 20 years long.

In late 2012, Prime, the then-Number 1 ceramic tile was transferred to Thai Siam, after the group paid $240 million to acquire 85 percent of stake.

Many other Vietnamese brands, which were once the pride of Vietnamese, have fallen into foreign hands. Da Lan, a toothpaste brand of Trinh Thanh Nhon, was sold by the businessman to Colgate Palmolive for $3 million. Diana of Do Minh Phu was transferred to Japanese Unicharm at the price of $184 million, while AAA insurance of Do Thi Kim Lien was sold to Australian IAG.

Even emerging names associated with Vietnamese culture and lifestyle such as Pho, Highlands Coffee and Huda Beer have also been sold.

In the case of FPT, if the plan is implemented as designed, another Vietnamese big retail name would be sold to foreigners. Nikkei has reported that FPT is now offering to sell its retail and distribution division at $120 million.

After Da Lan and P/S, two Vietnamese toothpaste brands were sold, the toothpaste market has been flooded with products bearing foreign brands. And since Kido was sold to the US company, there has been no Vietnamese brand strong enough to compete with foreign sweets brands.

An analyst commented that Vietnamese businesses tend to sell their companies after certain periods of development instead of continuing to develop the businesses into powerful conglomerates.

He said that limited financial capability and corporate management skills do not allow Vietnamese businesses to run companies when they become large.