Will a focus on consumption serve as the economic springboard for Vietnam? 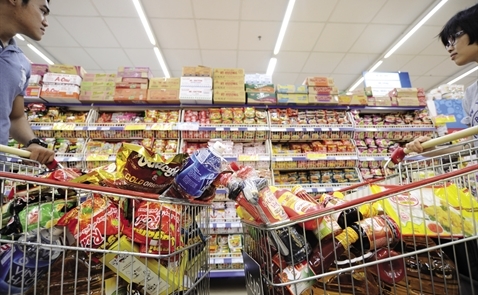 Three decades have elapsed since doi moi (renovation) kicked off in 1986. Vietnam has been developing its economy based on three important pillars – import/export, infrastructure development and consumption.

Of the three pillars, consumers once played a key role in the national economy’s growth, which made up 84.3 percent of GDP in 1990, according to the World Bank.

Nguyen Xuan Thanh, director of the Public Policy Program belonging to Fulbright University, said that Vietnam has long been a consumer-aided economy.

Though the role of consumers has gradually weakened over time under the impact of increases in investment and import/export, the proportion that household consumption contributes to Vietnam’s GDP has been high, 65.1 percent in 2015.

The figure was far higher than that of China, Indonesia and India and was only lower than the US.

The close relation between consumption and GDP growth can be seen in the fact that when the growth rate in the consumer sector decreased in the first nine months of the year (4.9 percent vs 7.3 percent in the same period last year), the GDP growth rate also decreased (5.9 percent vs 6.5 percent).

Meanwhile, import/export, the second pillar of Vietnam’s economy, which was hoped to create a driving force for GDP growth, now shows problems. Vietnam has had a trade deficit in the last two years.

Exports have been relying on foreign invested enterprises (FIEs). The exports of Vietnamese enterprises decreased by 3.5 percent in 2015, FIE exports increased by 13.8 percent which made up 71 percent of Vietnam’s total export turnover.

Meanwhile, experts warned that an economy which relies on FIE exports cannot have sustainable development. This is because FIEs may leave Vietnam at any time.

Regarding the third pillar, investment growth still can be maintained. However, experts warned that an economy which focuses only on investment may fall into the trap, like China.

China had impressive GDP growth rates thanks to huge investments, quickly becoming the world’s production base and earned big money. However, economic growth was affected when the global economic crisis occurred, which led to a fall in purchasing power.

Therefore, experts have suggested that the government reconsider the role of the consumer economy and use consumption as the springboard to boost economic growth in the future.

Jonathan Dunn, Chief Representative of IMF Vietnam, said that in ASEAN countries and China, the contribution of private consumption to GDP has been rising.