The biggest benefit of the business type is that the owners can make money from both the daily business and from the brand franchising. The market witnesses the high annual 20-30 percent growth rate.

VietNamNet Bridge – The biggest benefit of the business type is that the owners can make money from both the daily business and from the brand franchising. The market witnesses the high annual 20-30 percent growth rate. 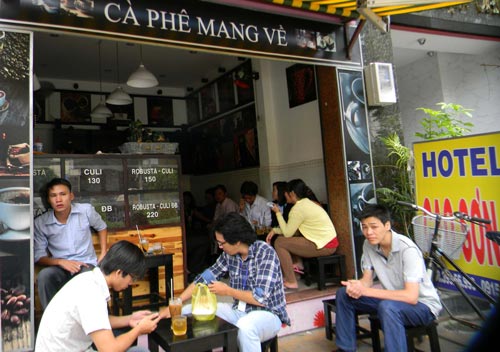 The first Milano take-away café was opened on Thong Nhat Street in Go Vap district of HCM City in September 2011. After two years, the number of cafés bearing Milano brand nationwide has reached 200.

A new Shi-fu Dimsum house’s shop was inaugurated on Nguyen Thi Minh Khai Street in HCM Cit in early November. The eighth Tokyo Deli, serving Japanese dishes, has been opened in HCM City, several years after the first shop of the chain was opened in 2007.

Cong Vang JSC has been very well known in Vietnam as the owner of 8 chains (40 restaurants). It started up with only five restaurants in 2008 and has been making strong development since then. Especially, in 2008-2012, the company obtained the steady annual growth rate of 21 percent.

A lot of other big chains have been well known to Vietnamese, including Trung Nguyen coffee, Thuan Kieu rice, Gao and Con Ga Trong restaurant chains.

According to Dr. Nguyen Cong Ai, Deputy General Director of KPMG Ltd, it is now the right time for investors to open restaurant chains. In the economic recession, retail premises are getting cheaper, which makes it easier to find reasonable premises to run business.

“We now give consultancy to some clients in their plans to expand their business chains,” he said. “The most important thing is that the restaurants must satisfy the consumers’ taste, especially the taste of the young customers.”

Ho Thi Kim Thoa, Deputy Minister of Industry and Trade, said franchising is a progressive business model which has been developing for the last tens of years in many countries in the world. In Vietnam, it has become popular over the last 5-6 years.

For the food business sector, it is a smart business model as the increase in the number of shops is the best advertisement method. It is more profitable to run a food chain with many restaurants than running a restaurant, because the chain’s owner can save costs when negotiating about material supplies.

Le Minh Cuong, Director of Le Phan Coffee Company Ltd, the owner of Milano chain, said at first Cuong did not intend to develop a chain of cafes under the mode of franchising.

Cuong only began applying the mode with the 11th shop. The franchisees have to pay VND55 million for shop setting up and VND10 million in deposit, while they receive 100 percent of coffee from Cuong.

He noted that the strong development could be a double edge knife to any chains. If the new shop performs well, this would be good for the whole chain. But if a one shop “has problems,” this would spoil the brand.

While a lot of chains have succeeded, many others have to leave the market. Gloria Jeans Coffee is a typical example of the failure of the business chains in Vietnam. Almost the shops of the chain have been shut down.