Nguyen Huu Thien, an independent expert on Mekong Delta’s ecology, has presented a report on the negative impact of the development of coal-fired thermopower plants on aquatic resources in the region. 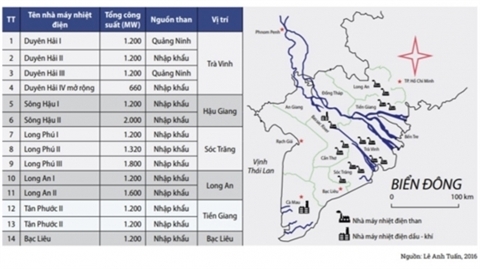 He warned that coal-fired thermopower plants will cause thermal pollution to the water environment, thereby affecting the ecosystem and aquatic resources in the Mekong Delta.

The water for power plants is taken directly from Hau and Tien Rivers. After it is used to cool machines, it returns to the rivers with a temperature higher by 7oC, causing thermal pollution. This worsens water quality.

The volume of Mekong water entering the Vietnamese territory changes greatly by season and year by year.

Thien estimated that at Long Phu Thermopower Center on Tran De feeder, the temperature could be up to 31.8-32.07oC, which may seriously affect aquatic resources.

Many hydropower plants are being built on Tran De feeder. Estuaries are one of the richest fisheries resources. Many aquatic species move in and out through estuaries, from the sea to the river and from the river to the sea. The damages caused by thermal pollution remain immeasurable, but are certainly very high.

These figures have been calculated based on normal weather conditions. In special cases, especially in drought conditions as in 2016, the influences would be more severe.

Supercritical technology is considered the most advanced technology applied at thermopower plants. The biggest advantage of the technology is that it emits less ash and dust, and is believed to cause minimum impact on the environment.

However, Thien believes that the technology cannot prevent thermal pollution. If many power plants discharge cooling water into the same water bodies, the total thermal pollution will still exceed the level the ecosystem can bear.

In natural environments, aquatic organisms live and grow within a narrow range of temperature, and some heat-sensitive species will die from changes in temperatures.