The Ministry of Natural Resources and Environment (MONRE) has asked provincial and municipal authorities to strengthen air pollution control and handle dust and emissions pollution, especially in Hanoi and HCM City. 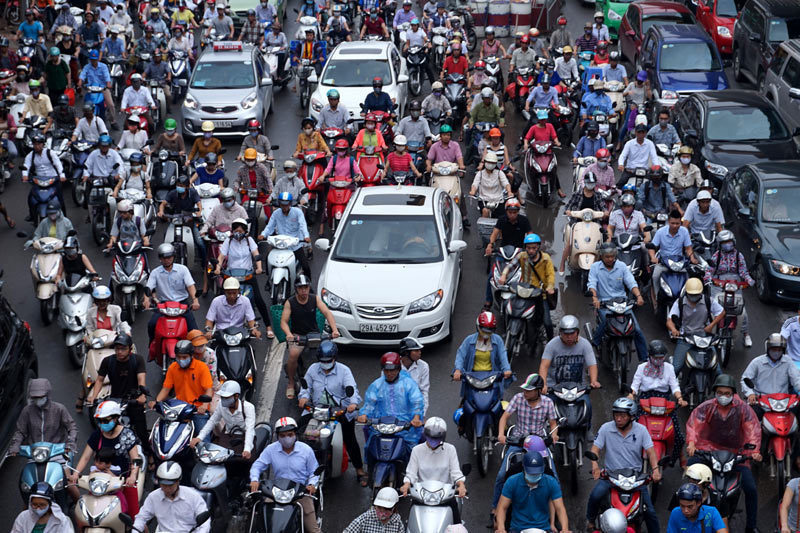 The air pollution is attributed to ineffective control of dust and emissions from vehicles, construction sites, and industrial production.

Of the measures mentioned, MONRE asked local authorities of large cities to recall and get rid of old vehicles that cannot meet requirements.

A representative of the Vietnam Register (VR) said that vehicle pollutants were mostly emissions from motorbikes and cars.

When the shelf life of passenger cars and trucks ends, number plates must be returned and no papers can be issued for road use. Vehicles meeting requirements must have emissions inspection in order to get registration certificates.

As for motorbikes, the Prime Minister in 2010 issued a decision on approving a motorbike emission control program which set a roadmap in different localities, based on vehicle types and years of use.

However, as the Law on Road Traffic still doesn’t have regulations on vehicle recall, agencies are waiting for a legal framework to implement the issue.

“The control over old vehicles to prevent pollution is an urgent matter. However, as this has relations to the right to own assets, there is still a legal problem,” he explained.

Meanwhile, Nguyen Van Thach, director of the Department of Traffic Safety under the Ministry of Transport, said that old vehicle recalling has been added to the draft of the amended Law on Road Traffic.

However, even if the Law on Road Traffic doesn’t include provisions on vehicle recall, management agencies still do this based on the Law on Natural Resources and the Environment.

Thach said old vehicles not only cause pollution, but also affect traffic safety.

“Old vehicles have low safety levels. They have weak lights and don't have safe brakes, and the chassis has degraded. It is very dangerous for them to join traffic,” he said.

A report released in early 2020 showed that as of the end of 2019, Vietnam had over 16,000 additional expired cars still in circulation out of the total 206,000 cars. They are a threat to traffic safety and environment.

Hanoi Department of Natural Resources and Environment has advised residents to stay indoors as air pollution worsened on January 6.

The Ministry of Natural Resources and Environment (MONRE) has requested provinces and cities thoroughly handle hotspots of air pollution and exhaust gas emissions.