Farm exports to EU and US stuck, Vietnam looks to China, ASEAN

In order to export $42 billion worth of products as planned, exports to China need to grow by 10 percent and to ASEAN by 9 percent to offset the decline in exports to the US and EU.

The EU and US are believed to need three more months to contain Covid-19, which means that import markets would only return to normal in June or July, according to the Ministry of Agriculture and Rural Development. 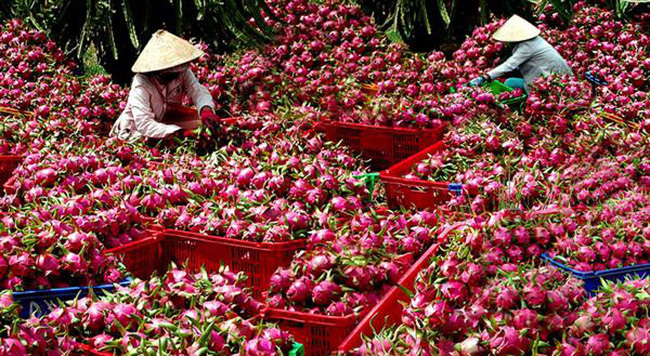 As for Japan and South Korea, the markets will be affected from the second half of March to May, which means that exports will resume in June.

The good news is that the Chinese market has recovered since late March as the country. The demand has increased rapidly, especially for farm produce and food.

In order to boost imports, China has paif special attention to restoring logistics activities and express delivery of goods to free up domestic consumption.

In addition to drastic administrative reform, China has cut tariffs on 80 import items.

Trade across border gates with Vietnam has resumed. Since February, nearly 28,000 farm produce trucks have been exported to the market.

“China will be the key market for Vietnam’s farm exports in 2020. It is necessary to mobilize all resources to exploit the market,” MARD said.

He said thrre was no need to worry about food shortage under any circumstances and that the export target of $42 billion is attainable.

However, the Ministry of Agriculture and Rural Development (MARD) warned that export turnover of $42 billion is a big challenge. Farm exports to China need to grow by 10 percent, to ASEAN 9 percent and other markets 9 percent to offset reductions of exports to the US and EU.

Therefore, the ministry has proposed applying a series of solutions to adjust agricultural production and increase processing and preservation. It has also requested support through tax and credit policies for production, processing, preservation and export.

Minister of Agriculture and Rural Development Nguyen Xuan Cuong said at a recent conference that the demand for food and foodstuff will be increasing after the epidemic. Vietnam needs to prepare for the post-epidemic period right now to boost exportd.

Room for Vietnamese farm produce exports to Singapore amid COVID-19