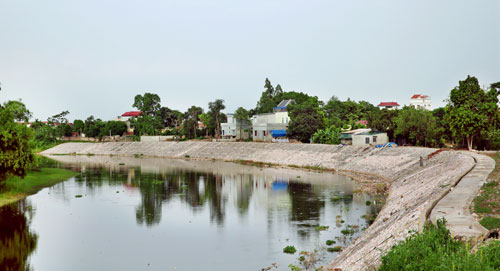 Hanoi is a city of rivers and lakes

The Nhue River originates from Bac Tu Liem district and connects with the Red River, where it is red with alluvial sediment. However, the water turns black when it runs across Nam Tu Liem, Ha Dong and Thanh Tri districts. The river sections there are full of construction waste and garbage thrown by locals.

According to the Hanoi Department of Natural Resources and the Environment, the environment indexes in the Nhue-Day basin are higher than permitted levels.

The Cau Bay River which runs across Long Bien and Gia Lam districts is in the same situation. Deputy chair of Gia Lam district Nguyen Ngoc Thuan confirmed that the river water is inky black, gives a bad odor and cannot be used for aquaculture and irrigation.

According to Mai Trong Thai, head of the Hanoi Environment Protection Sub-department, the rivers are polluted by waste water from residential quarters and untreated waste water from production workshops.

By November 2017, the city had found 1,509 waste discharge points, including 778 from production bases and 731 from sewers in residential quarters. Nhue and Day rivers do not receive water from Red River regularly, while Nhue receives waste water from To Lich river and brings it to Day. Both Nhue and Day have become polluted.

Hai said Hanoi has called for investments in waste water treatment projects from different sources, but the capital is just enough to treat 22 percent of waste water. In order to revive the rivers, Hanoi will need a huge amount of capital.

Many measures and action plans have been implemented to upgrade the quality of river water. In 2017, the city ran projects on creating landscapes and treating water environment to rescue To Lich, Tich, Nhue and Day, three other rivers in the western part of Hanoi.

The municipal authorities affirmed that waste discharge sources have been put under control, while more waste water treatment plants have been built to ensure that waste water can meet standards before reaching rivers.