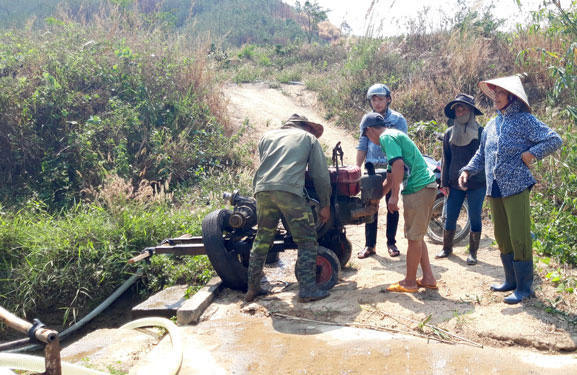 Meanwhile, Le Thanh from Vinh Son Song Hinh JSC affirmed that water storage by Thuong Kon Tum Plant is not the major reason behind the irrigation water shortage in the lower course.

He believes that the problem lies in the water discharge regime of Dak Ne Hydropower Plant. The Truong Thinh Energy Investment JSC does not discharge water regularly as stipulated in a plan approved by the Ministry of Natural Resources and the Environment (MONRE).

Nguyen Van Quang from the Kon Tum provincial Industry and Trade Department also thinks that if Dak Ne hydropower plant discharged water regularly with the capacity of 0.5 cubic meter per second, the shortage of water for irrigation wil' not occur.

He said thzt he had called the managers of Dak Ne and requested to discharge water, but his request was ignored.

Nguyen Van Quan, a member of the management board of Truong Thinh, said since the day Thuong Kon Tum began storing water, the water traffic had reduced to 0.75 cubic meter per day. That is why Dak Ne can no longer discharge water with the capacity of 1.29 cubic meters per second.

Lacking water, hundreds of hectares of crops of Kon Ray district’s people are withering. Meanwhile, the two hydropower plants are busy blaming each other about the water shortage.

Doan Thi Nham, a local woman, told the inspectors who came to the site in late March that Dak Snghe River had suddenly become depleted for one month. Her one hectare of rice has withered, while the remaining area has also been affected.

Tran Thi Ngoan, the owner of a 2.5 hectare coffee garden, said her coffee plants are withering because there is no water for irrigation.

Nguyen Van Nam, head of Hamlet 3, warned that if no solution is applied soon hundreds of hectares of rice and coffee will be lost.

A report from Tan Lap commune People’s Committee showed that 108.7 hectares of crops, including 92 hectares of coffee, more than 9 hectares of fruit trees, 5 hectares of pepper and 2 hectares of rice have withered because of the lack of water. A shortage of water for people’s daily use may occur in several days.

More farmers in the Mekong Delta have restructured their crop cultivation to adapt to the effects of climate change.