Mixed reactions after China announces it will release water

While the people and leaders of the Mekong Delta provinces are pleased that China decided to release from hydropower dams, irrigation experts said that most of the flow will be blocked before it runs to Vietnam.

VietNamNet Bridge - While the people and leaders of the Mekong Delta provinces are pleased that China decided to release from hydropower dams, irrigation experts said that most of the flow will be blocked before it runs to Vietnam.

Statistics and the bitter truth in the Mekong Delta 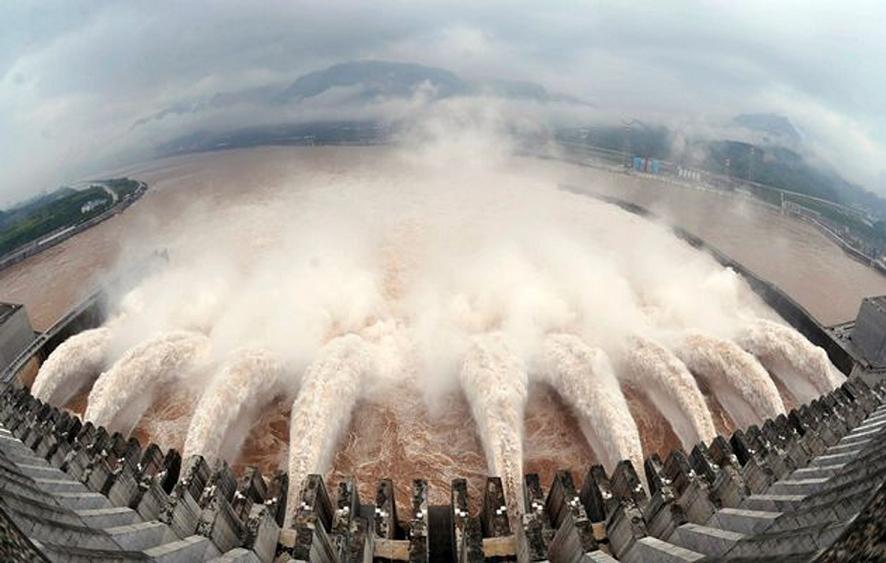 At least eight major dams have been completed and four other dams are under construction in China, affecting water flow in the Mekong Delta.

China is also a major investor behind the construction of other dams in the lower Mekong River, in Laos and Thailand.

So far, the total capacity of the reservoirs at hydroelectric dams in Yunnan Province, China has amounted to over 20 billion m3, while the flow running through Vietnam’s Mekong Delta is only 40 billion m3 monthly.

Based on these figures, China's reservoirs have been causing a huge impact on the flow in the Mekong River, a factor leading to damage caused by salinity and landslides in the Mekong Delta.

If China releases a certain amount of water, the Mekong Delta can be saved from prolonged drought.

It should be emphasized that the benefits from hydropower development are much less than the losses it causes, namely environmental change, loss of fisheries, crop failure, the extinction of many flora and fauna species.

The Mekong River Commission has conducted many scientific studies and given warnings to restrict and stop the construction of hydropower dams in the Mekong River to ensure the sustainable development of all countries that the river flows through.

However, the warnings and recommendations of the Mekong River Commission have been counteracted completely by China’s argument that China reserves the right to build anything in the Mekong River in its territory.

As the drought and salinity in the Mekong Delta has reached its peak, VietNamNet on March 10 published an article about Vietnam, asking China to discharge water to save the downstream Mekong Delta.

One day later, on March 11, the BBC and Dan Viet, a local news site, also posted articles of the same content “Vietnam asks China to release water to save the Mekong Delta from drought and salt intrusion”.

The Vietnamese Prime Minister instructed the Ministry of Foreign Affairs to forward the proposal to China.

China then declared it would release water from its Jinghong Hydropower Station reservoir into the lower Mekong River in order to deal with drought in Vietnam from March 15-April 4.

“We held that the protection and sustainable use of water in the Mekong River is the responsibility shared by countries along the river to harmonize the interests of relevant nations and regional people’s lives,” the Vice Spokeswoman said.

Across the Mekong Delta region, Vietnam’s largest rice producer, as many as 140,000ha of rice have been damaged so far, nearly 90,000 ha of which resulted in a 70 percent loss of crop.

In the 2015-2016 winter-spring crop, there are 339,200ha of rice in coastal Mekong Delta provinces prone to saltwater intrusion and drought, accounting for 21.9 percent of the region’s total rice area, 104,000ha of which have been severely impacted.

If the drought lasts until June, nearly 500,000ha of rice will have to remain unsown, equivalent to over 40 percent of the total area of coastal provinces and 30 percent of the overall cultivation acreage in the region. 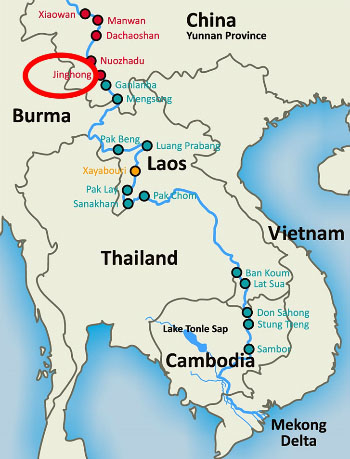 Hydropower dams in the Mekong River.

As China stated to release water from its Jinghong Hydropower Station reservoir in Yunnan province into the lower Mekong River in order to deal with drought in Southeast Asia, including Vietnam from March 15-April 4, officials in the drought-hit provinces and experts had different reactions.

Mr. Luong Ngoc Lan, director of the Department of Agriculture and Rural Development of Bac Lieu Province, said Bac Lieu in particular and the Mekong Delta in general will greatly benefit from China’s move. Lan said Bac Lieu was ready to welcome the fresh water flow from China to ease the current severe drought.

In Soc Trang province, Mr. Huynh Ngoc Van, deputy director of the Department of Agriculture and Rural Development, also said that the local irrigation system was ready to open for the flow. Soc Trang is also suffering from the historic drought.

Hearing the news, elderly farmer Pham Minh Hung in Soc Trang province said that he and his neighbors were very happy with the information. “If we have fresh water, 300 hectares of sugarcane of farmers in the district will be saved," he said.

Contrary to the joyful attitude of the people and leaders of the dry lands, Dr. To Van Truong, former Director of the Southern Irrigation Planning Institute, said China is not a member of the Mekong Agreement 1995 (MRC) so the countries in the downstream region could not ask this country to release water. Even when China agrees to discharge water to the downstream, the flow will be taken first by Thailand, Laos and Cambodia, which are also experiencing a drought, before it runs to Vietnam.

Truong said that only about 3-4% of the water can reach Vietnam’s Mekong Delta. He said Vietnam should ask China to share information on the annual operation plan of some hydropower plants in the Mekong River.

Dr. Tran Anh Tuan, Deputy Director of the Institute for Climate Change Research, said that Thailand, Laos, and Cambodia are facing severe drought, especially Thailand, so they will seek to take most water from the Mekong River to the fields. Thus, the flow to Vietnam will be very modest. Tuan said the water may only be enough for daily life purposes, not to rescue crops.

He also said that Vietnam’s proposal of discharging 2.300m3 per second continuously for seven days each time is impractical.

According to Dr. Tuan, the Jinghong hydropower reservoir of China has a maximum capacity of 249 million m3. Therefore, if China releases water at the request of Vietnam, the reservoir will dry up after only 30 hours. 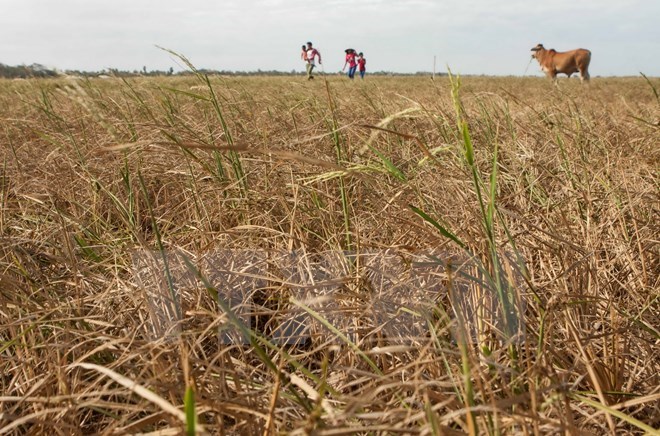 A dried field in the Mekong Delta

Tuan also said that even if there is water in the Mekong River Delta, it will be ineffective because at the present, most of the rice cultivation areas along the coast have been damaged already.

Nguyen Huu Thien, an ecological expert, also told VietNamNet that it is difficult for water from China to reach Vietnam’s Mekong Delta.

According to Thien, due to the extreme phenomenon of Elnino this year, drought is affecting many countries in the region like Laos and Thailand, not only Vietnam.

At least 82% of the water that the Mekong Delta gets comes from the basin flowing through Laos, Thailand, and Cambodia. The contribution of China is only about 16% of the flow.

Therefore, even if China discharge water at the request of Vietnam, the amount of water will flow into the branches of the Mekong River in Laos, Thailand and Cambodia before going to Vietnam.

"Assuming the water flows to Cambodia, it will run to the TonlevSap Lake rather than to the Mekong Delta,” Thien stressed.

Dr. Dao Trong Tu, counselor of the Vietnam Rivers Network, said that even if China releases water, the water will have to pass up to 4,200 km distance to arrive in Vietnam. This is impossible because other countries in the Mekong River Basin such as Thailand, Laos and Cambodia are also facing drought.

On March 16, Tran Quang Hoai, Deputy Director of the General Department of Irrigation, Ministry of Agriculture and Rural Development (MARD), confirmed that the MARD had made specific calculations before conveying the proposal to China.

"The storage capacity of Jinghong hydropower reservoir is not large, but this is the closest reservoir to Vietnam so we asked them to release water from here. China has many other reservoirs built near this one and they will regulate the water from the upper reservoirs to be able to discharge the water volume at our request," said Hoai.

Hoai also said that it is not sure whether other countries will take water from this source or not. He said the General Department of Irrigation will continue to monitor other countries (such as Laos, Thailand, Cambodia) to know if they get water or not to make changes through regular exchanges with these countries.

"According to our calculations, if China releases water at a speed of 2,300 m3 per second at our request, it will help the Mekong Delta in dealing with drought and salinization," he said.