A number of ferrochrome projects existed in the past, but most of them were unprofitable.

To Duy Phuong, deputy chair and secretary general of the Hanoi Foundry and Metallurgy Science and Technology Association (HFMSTA), said the impact of the project on the environment would depend on the technology that the investor uses. 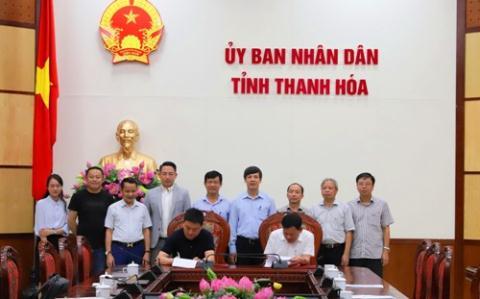 The local authorities and investor signed MOU on cooperation and investment

If the technology is advanced, the emissions could be eliminated, while waste water could be treated for reuse.

At a working session between Mintal and the local authorities of Thanh Hoa province, where the investor wants to set the plant, the representative of the group said Mintal has ferrochrome, stainless steel and color metal in China, South Africa and Pakistan.

Regarding technology, Mintal affirmed that it is using the most advanced technologies available, Finnish technology for ferrochrome carbon production and Japanese technology for stainless steel and color metal production.

The technologies eliminate all emissions, while waste water will be reused in production. They save 1 billion kwh of electricity a year, and cut 90 percent of sulfur discharged into the environment and 75,000 tons of coal.

Phuong said it would be okay if Mintal uses modern technologies as promised, but it would be a big problem if it tries to bring to Vietnam outdated technology it no longer uses in its home country.

“In general, no one uses outdated technology nowadays. In the past, electric arc furnace at steel mills consumed thousands kwh of electricity an hour and produced big volume of dust. But now, with super power electrode, no smoke and dust is discharged,” he commented.

An analyst said the Thanh Hoa provincial authorities should be cautious when licensing the project, because Vietnam has had problems from projects invested in by Chinese.

“They (Chinese investors) may say one thing and do another,” the analyst said.

In principle, before implementing projects, investors must have EIA (environment impact assessment) report, in which investors and consultancy firms must show technical solutions to handle emissions and waste water.

The solutions must be considered by state management agencies, the Ministry of Natural Resources and the Environment and independent experts, and must be approved by appropriate agencies.

Also according to Phuong, Vietnam has other ferrochrome carbon plants, including Co Dinh Thanh Hoa Chromite and Nam Viet Chromite, but most of them are running at a moderate level.

He said the projects lack capital and use outdated technology, so the products have low quality which cannot be consumed domestically or exported.

Vietnam now mostly makes structural steel and rarely makes alloy steel, so the demand for chrome is not high.

What will the ferrochrome carbon plant in Nghi Son offer?

A Chinese investor wants to pour $2 billion into a ferrochrome carbon plant in the central region. Environmental solutions, however, remain a question.