Hanoi asked local residents to sort domestic waste at source 10 years ago in a pilot program. The municipal authorities have also passed regulations to implement this on a large scale. However, everything remains on paper.

In 2006-2009, Urenco, the Hanoi Urban Environment Service Company, began applying the waste treatment model under which waste owners were required to separate waste at source. This was implemented under the 3R model in accordance with a project funded by JICA. 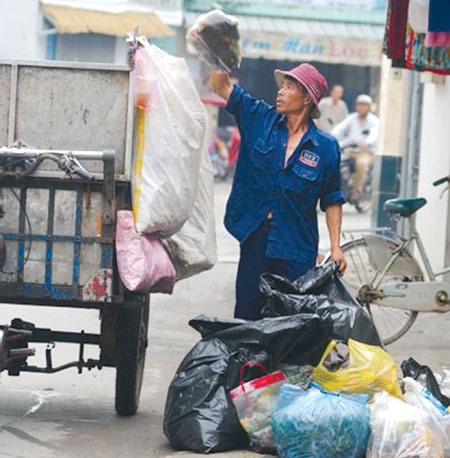 The waste separation at source was then done on a trial basis in four wards of four inner districts.

The pilot program finished in 2009 but no further progress has been made.

Nguyen Huu Tien, general director of Urenco, said separation waste at source is a good model, but it cannot succeed in Vietnam because of many conditions.

“Since waste is separated into organic and organic waste, there must be two different kinds of trucks to collect and carry waste, and two different treatment facilities. People separated waste, but collectors poured the two kinds of waste into one carrying truck. As such, the separation of waste was in vain,” he said.

Meanwhile, the separation at source could not be implemented throughout the city at the same time. People were confused identifyingwaste.

Meanwhile, it was difficult to re-organize the waste collection system because there were numerous individual and institutional collectors.

Tien said that only when Vietnam has all three conditions – policy, technology and scale of application – will sorting waste at source become reality.

He said it was time for state management agencies to identify which technology is suitable to waste treatment in Vietnam. The State needs reasonable policies to encourage investors to join the process of collecting and treating waste.

“Once policy and technology are ready, the sorting of waste at source must be compusory. This means that waste owners will have to separate waste themselves,” he said.

In HCMC, separating waste at source has become mandatory as per a decision of the municipal authorities on May 17. However, many people have not heard about the policy.

The city discharges 8,900 tons of domestic solid waste each day, 76 percent of which is buried because the separation at source still cannot be implemented well.