The Mekong River Commission (MRC) needs to take responsibility for the solutions to deal with the river's color change, according to Vu Trong Hong, former Deputy Minister of Agriculture and Rural Development.

The water in some sections of Mekong River, including the one running through Thailand’s Nakhon Phanom and Laos’ Thakhek provinces, has turned greenish-blue. The phenomenon, according to some scientists, could be a sign of danger. 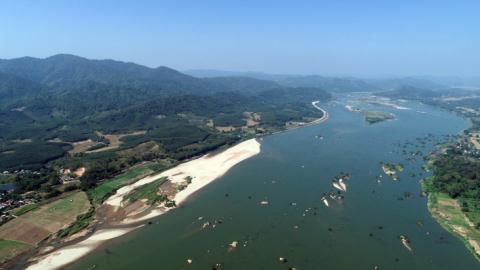 MRC said the reduction in water level, the decrease in river sediments and the presence of algae on the sand and at the bottom of the river could be the causes of the recent changes in Mekong’s water color.

The commission predicted that the phenomenon is likely to spread to other parts of Mekong, in the areas with low flows, warning that the phenomenon may cause very serious consequences, such as reducing the amount of food for insects and small fish, reducing aquatic biodiversity, thereby affecting fishing productivity and livelihoods of the local communities.

Hong warned that if the water does not come, Mekong River would continue undergoing the drought, the phenomenon would also appear in the river section in Vietnam.

If so, not only algae would appear, but alluvium, including sand, gravel and rocks would also be retained and Mekong Delta cannot be consolidated.

“Sand, gravel and stone nourish the Mekong River in Vietnam, so that the banks are not destroyed. But when there is no sand and gravel, the flow will grab its banks and take sand and gravel away,” he explained.

Hong went on to say that MRC’s explanations and recommendations are necessary, but they are not enough. It is necessary to point out what to do now.

MRC, as a transnational organization that has been monitoring Mekong for a long time, is primarily responsible for gathering countries in the Mekong basin to discuss and work out solutions to the problem.

It is necessary to review the river flow (Q) to ensure enough alluvium and avoid oxygen deficiency, so that aquatic organisms can survive, that is, the conditions to ensure the Mekong can ‘live’. Now algae appears because of the lack of oxygen.

The countries where Mekong runs across will suffer. China is located on the upper course of Mekong. And though it is not a member of MRC, it has to take responsibility for this. Hong said MRC needs to raise its voice and ask China to join forces to deal with the problem.