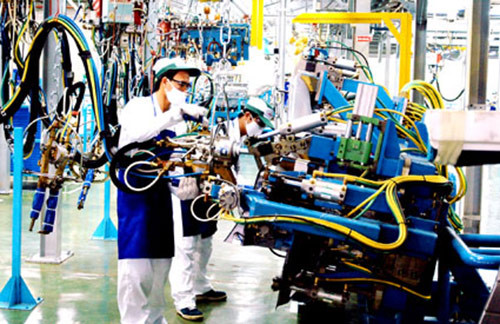 The efficiency of the technology transfer from FDI sector, according to the World Economic Forum 2016, is surprisingly low. In 2009, Vietnam ranked 57th in the world in this criterion. But it fell to the 103rd position in 2014, or by 46 grades just after five years. Malaysia was 13th, and Thailand 36th.

The only industry which used high technology and made up 12.2 percent of added value were electronics, computers and optical products.

However, though listed as ‘high-technology industry’, the work implemented in Vietnam was just assembling which did not use ‘high technology’.

A report showed there are 14,000 FDI projects, but only 600 technology transfer contracts, a very modest proportion of 4.28 percent.

Regarding the quality of the technologies transferred, MPI said more than 80 percent of foreign-invested enterprises use medium technology, 14 percent low and out-of-date technology and only 5-6 percent of them use high technology.

Meanwhile, director of the Center for Science and Technology Application and Startup, noted that most foreign enterprises invest in Vietnam under the mode of 100 percent of foreign invested legal entities, not joint ventures, so they don’t have the responsibility of transferring technology to Vietnamese enterprises.

A technology transfer cycle is considered complete when the transferee can master technology and further develop the technology on this platform.

Most of the countries import technologies through the FDI channel first, and then apply R&D to develop technologies of their own.

South Korea spent 40 years on the process. It began importing technologies through FDI in the 1960s and step by step began carrying out ODM (original design manufacture) in some fields in the 1990s.

In the case of Thailand, just within a short time, from 1986-1995, the country witnessed strong development in capital, technology and management skills with domestic capital accounting for 72 percent and FDI 28 percent.

Foreign invested enterprises are asked to closely link with domestic enterprises in a number of production stages.

Meanwhile, after the last three decades, Vietnam is still in the first step.