VietNamNet Bridge - Vietnam needs to import 16,000 Australian cows to satisfy the high demand of the domestic market. There is no other supply source bigger and more competitive to replace Australia.

VietNamnet Bridge - Vietnam needs to import 16,000 Australian cows to satisfy the high demand of the domestic market. There is no other supply source bigger and more competitive to replace Australia. 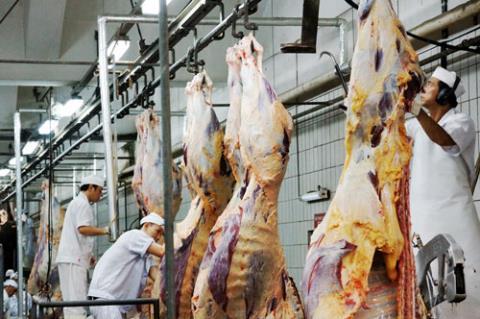 The cow imports from Australia increased sharply in recent months after a period of interruption earlier this year, when the Australian government decided to suspend cow exports to some slaughterhouses in Vietnam after reports about inhumane slaughter.

The director of a company specializing in importing and distributing Australian cows told the press that 16,000 cows are imported to Vietnam a month and the figure would be increasing.

“I am sure the imports will be increasing because there is no other source of supply which can provide products in large quantity and offer competitive prices,” he said.

On December 10, Dong Ha Company opened a shop specializing in distributing Australian beef in Can Tho City.

Dong Ha’s director Le Thi Kim Thu said the company plans to import 2,000 Australian cows in the first consignment, while the import volume in the next months will be based on the market demand.

Thu said this is the first closed and professional slaughtering line in Mekong Delta. “We choose healthy and safe cows in accordance with Australian ESCAS (Exporter Supply Chain Assurance System) and Vietnamese safety standards,” she said.

Thu went on to say that the company plans to open more shops and first-class sales agents in other districts in December. In a longer-term plan, it will bring Australian beef into supermarkets, traditional markets, restaurants and hotels in Mekong Delta and HCMC.

Vietnam not only imports cows from Australia, but also imports beef from Europe. A report from the Ministry of Agriculture and Rural Development (MARD) showed that in the first nine months of 2016, imports from Europe were 15 percent higher than imports in 2015.

Analysts have warned that imports will be a threat to the domestic husbandry industry. The Vietnam Livestock Association also admitted that high production costs make it difficult for domestic enterprises to compete with imports, especially when trade barriers are removed within the framework of FTAs.