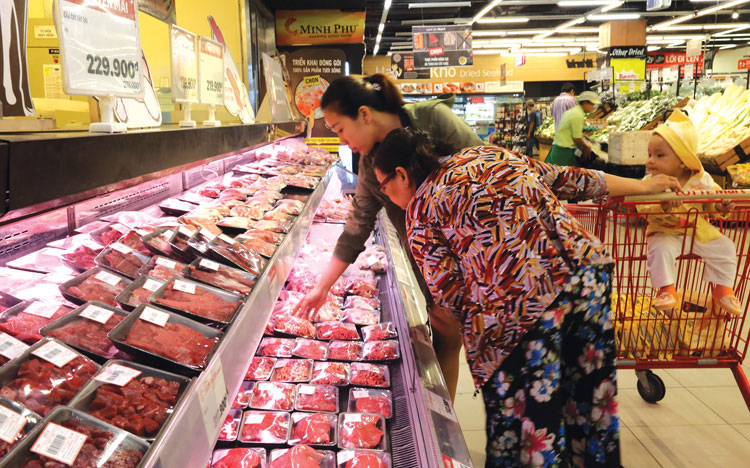 The factory has processing capacity of 1.4 million pigs, or 140,000 tons of fresh pork a year, equal to 5 percent of total pork supply in the market.

MSN stated that it would not buy live pigs from other sources, but will breed pigs in a closed chain to ensure the quality of products. The company has a farm of 10,000 pigs in Nghe An province, while it cooperates with farmers to breed pigs in accordance with Masan’s standards.

Most recently, SNF, another subsidiary of Masan, decided to cooperate with Jinju Ham from South Korea to jump into the processed meat market.

Park Jungjin of Jinju Ham commented that the current Vietnam processed meat industry is fledgling, just like South Korea and China 20 years ago.

The cooperation with SNF will help the joint venture raise processed meat consumption to 20-50 percent.

Like fresh meat of MNS, processed meat of SNF will be marketed by the end of the year. This is the final step in the 3F (feed, farm, food) model that Masan is pursuing.

At present, Vietnamese per capita consume an average of 33.5 kilograms of pork a year, while the figure is expected to increase to 39 kilograms.

Vissan, a slaughterhouse and meat supplier, which can see the potential, is stepping up the construction of a pig slaughterhouse in Long An province. At the same time, it put a wholesale shop model into operation. The first shop of this kind opened in Ba Chieu Market in Binh Thanh district in November 2017.

According to Ipsos Business Consulting (IBC), in 2013, Vietnam consumed 3.5 million tons of meat of different kinds, and the figure is expected to increase by 30 percent to 4.5 million tons by 2019.

The Vietnamese pork market has potential, but 85 percent of the breeding industry is undertaken by small farms, while there are only a few clean meat providers in the vast market, such as Vissan and CP Vietnam.

According to Vissan’s general director Nguyen Ngoc An, the most important problem that meat suppliers have to solve is bringing fresh meat to customers.

At least 85 percent of Vietnamese consumers prefer buying fresh meat at traditional markets, which makes it difficult for Vissan to expand market share.

In order to bring meat to consumers when the meat is still fresh, suppliers need to have a good transportation system and slaughtererhouses nearby.

Are FIEs the cause behind the increase in rising pork prices in VN?