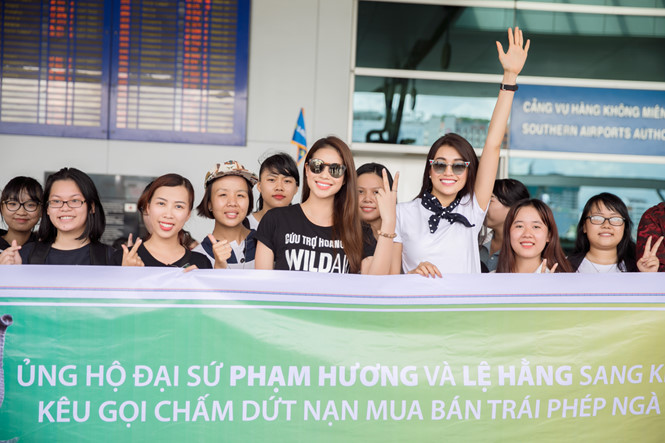 Huong and Hang were invited by the Centre for Hands-on Action and Networking for Growth and Environment (CHANGE) and WildAid Organisation as goodwill ambassadors. The trip aims to raise awareness about elephants and prevent illegal ivory trade.

Many fans flocked to the airports to see Huong and Hang off. The Miss Vietnam Universe and runner-up also brought with them a banner that called on everyone to protect the elephants and stop ivory trade.

"About 33,000 elephants are killed each year for their tusks. That's a terrible number and the elephants are becoming extinct," Hang said.

She hopes to learn more about the species via the trip to Kenya and that she can use new knowledge and her voice to stop potential ivory traders or buyers.

The trip will last from May 22 to 27. Huong and Hang will be introduced to the raw beauty in Kenya, meet with the forest rangers, conservationists and orphaned elephants. They also participate in public services and a documentary produced by WildAid and will be released in Vietnam.

Representatives of CHANGE, WildAid and Miss International 2012 Ikumi Yoshimatsu will also join in the trip.

In 2015, tonnes of elephant tusks and rhino horns were seized while being transported into Vietnam. In August, 2015 eight tonnes of elephant tusks from Mozambique and Nigeria was discovered at Tien Sa Port in Danang City. In April, local authorities of the Central Highlands province of Gia Lai seized more than 1,600 items suspected to be made from ivory.