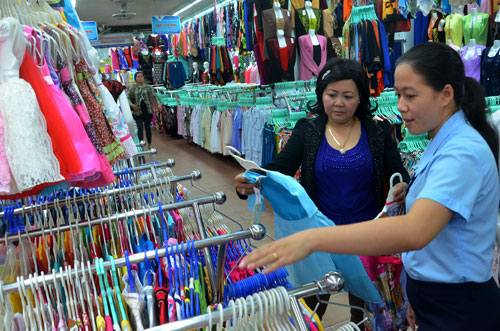 However, the latest market report by Nielsen Vietnam, a market survey firm, showed that the traditional trade channel saw growth rate higher by 5.4 percent than the modern channel.

My Ha, a housewife in Phu Nhuan district in HCMC, said she goes to supermarkets every weekend to buy essential goods for daily life. However, she does not seek milk powder and diaper for her kids there, but prefers buying the products at groceries or shops.

“A can of milk powder at supermarket is VND40,000-50,000 more expensive than at groceries, though the products are exactly the same,” she explained. “A box of diapers is 10-15 percent more expensive. Even when supermarkets run sale promotion programs, the prices quoted there are also higher by 3-7 percent.”

When asked to compare the quality of the services provided by supermarkets and groceries, Ha said she just needs to make a phone call and place orders, and the deliveries will be made by groceries’ workers at her home at the time she wants.

This means that she doesn’t have to spend time to go to supermarket and waste time to park cars.

Sau Thuan, the owner of a grocery in Phu Nhuan district, said that her small grocery has been running well despite the appearance of convenience stores in the area with modern interior decoration.

“The key is in the selling price,” she explained. “Their prices are at least 10 percent higher."

Thuan said she is satisfied about her business, because she has many loyal customers, while more manufacturers have contacted her and asked her to work as sales agents for them.

The report by Nielsen also pointed out that traditional retail makes up 85 percent of total revenue of fast moving consumer goods, or $10 billion.

Analysts commented that traditional markets and groceries will not ‘die’ as predicted because they can provide products at reasonable prices and with convenience.

Nielsen pointed out that while traditional markets bring the highest proportion of revenue to manufacturers, they have not taken full advantage of this.

Many manufacturers are trying again to develop their distribution networks, especially in rural areas, though it is costly.

Luong Van Vinh, director of My Hao Cosmetics, said on Nguoi Lao Dong that 90 percent of My Hao’s revenue comes from the traditional channel.

Encouraged by the impressive growth rate of 20 percent in 2015, Lien Thanh Company is considering setting up more distribution links in the western part of the southern region.